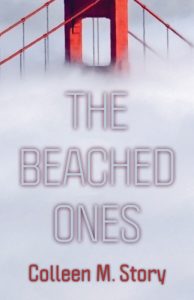 What would it be like if everyone thought you were dead? What if people walked by you and didn’t seem to notice you? A few people, like your ex-girlfriend, Jolene, and her new boyfriend, Brent, can see you. But Isabella, the medium, can’t. You seem solid enough to yourself. Normal functions work—you can eat, drink and wear clothes. You swear you are alive and well. But one moment you’re at the ocean helping beached whales and the next you’re lying by railroad tracks; then you’re in the Midwest. With no idea how you moved from place to place. Welcome to the dystopian world of Daniel Shepard in The Beached Ones by Colleen M. Story.

Story keeps the reader off balance by inserting flashbacks of Daniel’s earlier life in a single-parent, dysfunctional household. Daniel escapes that environment by becoming a motocross stunt rider. One of his current desires is to get to San Francisco to meet his younger brother, Tony. The other is to reclaim Jolene.

I never really became involved with the characters in this novel. They all seemed like chimeras. Daniel seemed the most solid, alive character even though he apparently died from an accident at a motocross show prior to the beginning of the novel. Ghostly as he is, Daniel is the anchor holding the lives of those within his sphere together. Daniel feels responsible for everyone who touches his world, no matter how tangentially. That includes Trisha, a teenager who he doesn’t know, who commits suicide in a parking lot while Daniel stands helplessly nearby.

Are our lives as straightforward as we would like to believe? Do we absolutely know where we’re headed at any given point? Or are we pulled this way and that? Do we live a vertiginous life as Daniel does in both human and spirit form?

Are the beached whales that Daniel attempts to save at the beginning of the novel synonymous with, and representative of, those humans in his life whom he also tries to save? Hmm, read The Beached Ones and draw your own conclusions.

1 thought on “The Beached Ones”