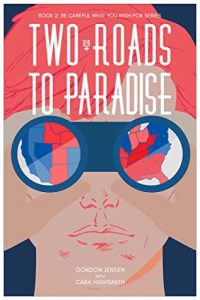 Two Roads to Paradise (by Gordon Jensen with Cara Highsmith) deals with a very divided America. This second offering in the Be Careful What You Wish For series continues where The Way Out left off. The world is recovering from a pandemic caused by a genetically modified corn that was originally constructed to become biofuel for a deep-space mission to Proxima b in the Alpha Centauri galaxy. But since it was quick growing, the new strain of corn was used to feed the burgeoning population as well. The downside of this new supposedly wonder food showed up a few years later with reduced live births and fewer viable male babies.

Seems the corn negatively affected the Y chromosome. So, more birth defects and infant deaths. With the return of the Alpha Centauri I, in The Way Out, after a strange 40-year absence, hopes for a cure and vaccine had been high, aided by the unaffected male crew members. But no such luck.

In Two Roads to Paradise, it’s now about three years after the events portrayed in The Way Out. Hunter Young, one of the crew members on the Alpha Centauri I, is now an official in President Margaret Marshall’s administration. He’s also a member of the K Group, a resistance group be trying to rectify the cure and also de-radicalize the country, which had grown ever more divided along red and blue lines.

A major part of Two Roads to Paradise covers a trip Hunter Young takes to meet Lydia Statham. Statham is a former major in the US Army and a leader in the resistance. Travel is tough because of tension and border patrols between the various disgruntled red and blue sections. Thus, he travels by water along part of the Great American Loop. He then crosses northern Mexico by car to get to Nevada.

Young, Latham and other resistance members attempt to steal a new cure from a group who want to only provide it to certain groups of white people. All does not go as planned with the resistance’s heist. What is to become of the K Group? Can anybody calm the frayed nerves on both sides of the country’s divided population?

Gordon Jensen is spot on with his characters. One can see Hunter Young, the man of action, twitching and wiggling a foot as he sits through another interminable DC meeting. Lydia Statham, although polite and friendly, is still very much a retired major and a good leader in the resistance. In his travels from Washington, DC, to Nevada, Young engages with well drawn characters who stand out as individuals.

Jensen covers a few current hot topics, such as pandemics and how the government handles information releases and acceptance of a new vaccine. Another topic is the tension between blue and red states. Jensen heightens the tensions. Groups of states band together into different regional zones based on the predominant ideology of each alliance. Canada and the northern part of Mexico are now called The Americas, rather than just the United States of America. Jensen’s outlook may well be very prescient.

Overall, a well-written work. One exception in an enjoyable read is a rather dull dissertation on the politics of the territorial divisions.

I received a free copy of this work from ireadbooktours.com in exchange for an honest review. 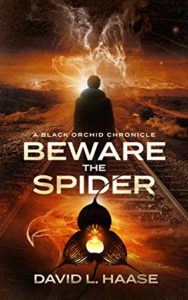 Hang on, Beware the Spider by David L. Haase, moves like a speeding train. As in the first novel, nature photographer Sebastian Arnett still searches for a way to rid himself of Empaya Iba, the Bornean spider spirit which has become his familiar. Again, Arnett goes back to Borneo, this time via Australia. An Australian aboriginal spirit and a secret Chinese agent have other plans for Arnett.

Fireworks erupt when Arnett fights off an aboriginal spirit, gets caught in a typhoon-like storm in Borneo and hitches a ride atop a moving train in the American Rockies. As in the first book, various efforts to help come from Jimmy Beam (an Australian undercover intelligence operative), Mike Owens and others in the U.S. military who attempt to keep tabs on Arnett, Pony That Sees Far, a Native American medicine man (or Joe as Arnett thinks of him), Tom Kingston (or T, to his friends), and Amanda Cox Campion (Arnett’s love interest).

Beware the Spider is a great addition to Haase’s Black Orchid Chronicles, a supernatural/magical realism series. (See my review of The Mark of the Spider, the first book in the series.) The pacing is quick and even, an improvement over the first book in the series. Arnett and Tom Kingston (son of Campion’s ex-husband) begin to form a closer relationship throughout the book and come to rely on each other for safety. Also, we learn that Amanda Campion is always well dressed, even in the wilds of the Borneo jungle. But well-pressed pants with knife-sharp creases in the humid jungle? Hmm, maybe.

A very engaging read. I look forward to reading the next installment and learning the ongoing fate of Arnett, Campion and Kingston.

The author gave me a free digital copy of this book in exchange for an honest review. Otherwise, I have no ties or interaction with the author. 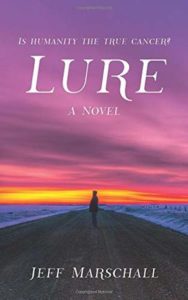 LURE by Jeff Marschall (© 2019) begins on an interesting, fast-paced note. Dr. John Mueller is an intern doing a research project at a university lab in somewhat remote Saskatoon, Saskatchewan, Canada. Mueller is bored with the dark, cold winter weather as well as his minor research project. His outlook abruptly changes as two supposed “agents” of the U.S. Food and Drug Administration accost Dr. David Devilliers, Mueller’s lab director, and demand that Devilliers turn over his cancer research. Mueller witnesses the altercation, takes Devilliers’ laptop and escapes with it, with the bogus agents in hot pursuit. Life-and-death decisions could result.

Unfortunately, the rest of the book does not maintain the fast pace. A close third-person narration that follows Mueller as the protagonist dominates LURE and effectively crimps the story’s style. For most of the book, the reader is subject to Mueller’s uncertainty and indecisiveness about what to do with Devilliers’ research. Such flip-flopping indecision creates an all-too-human, but unsympathetic protagonist.

In addition, women in Mueller’s life are rather stereotypical. Stephanie, Mueller’s ex-girlfriend, exhibits self-centered, egotistical attitudes. “Stephanie had natural presence and loved attention.” “She always wore jewelry…She could talk passionately and knowledgeably about amber, pearls, the many varieties of agate and jasper, and more that he couldn’t remember.” “She was always very careful about her appearance.” Signs of expensive tastes? When having a few drinks during a meeting with Stephanie later in the book, Mueller notices, “Stephanie wasn’t far behind, although she was definitely more accustomed to drinking wine; he suspected her tolerance was quite a bit higher than his, despite his greater body mass.” Signs of a drinking problem for Stephanie? Even Mueller’s mother is stereotypical. “When he got home, his mother was there, standing in her spotless kitchen, quivering with curiosity.”

On the positive side, Marschall takes on hot, current social topics such as population expansion and, to a lesser degree, climate change. (Population expansion comes up because Dr. Devilliers’ research involves a cure for cancer and, thus, a longer life expectancy for some people.) Conversations with some of the folks wanting to steal Devilliers’ research highlight Mueller’s indecisiveness. The reader is never certain what Mueller’s definitive opinion is about these topics. Who gets to decide who lives and dies by withholding medical cures, among other means? Unless readers take the final actions of Mueller and new girlfriend, Julie, as an answer. One that involves a seeming lack of remorse and a good helping of current-state capitalism. (The movie, Avengers: Infinity War, in its way, also looks at population control on a universal scale.)

I received a free copy from the author to give my honest opinion. 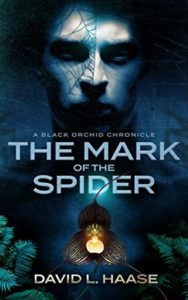 The Mark of the Spider is an installment in David L. Haase’s Black Orchid Chronicles, a supernatural-thriller series. On a working trip to the Southeast Asian island of Borneo, photographer Sebastian Arnett searches for rare orchids to photograph. At the invitation of an Australian attaché on a mission to locate mineral deposits, Arnett joins his group’s forays into the interior. When an old, indigenous woman offers him a shot at the ever-elusive black orchid, Arnett and his mates take her up on it. But they get, and lose, more than they bargained for.

END_OF_DOCUMENT_TOKEN_TO_BE_REPLACED

Author Pam Anders leads readers on a merry chase through the USA’s Pacific Northwest in The Dagger, her debut novel in the Kat Delaney series. From the forests of Idaho through Walla Walla, WA, towards Portland, OR, Kat’s grit and perseverance defeat a madman and a cult of incestuous monsters.

Kathryn (Kat) Delaney has a good life. A 24-year-old teacher who enjoys her work, Kat lives with her father in Portland, OR. Although Kat enjoys the nice house and nice cars, she wonders about her father, but has stopped asking. For all her life, Kat’s father refused to answer any questions about himself, his income or background. Or the identity of Kat’s mother. Her father just stonewalls her. She also ponders the need for an elaborate alarm system that is monitored from a secret room built by her father.

Consequently, Kat knows nothing when her father, Sean Delaney, is found dead in the woods while on one of his periodic “hunting trips.” Where had her father gotten the several thousand dollars in his possession? Can she convince Detective Leo Burton that she and her father were not drug dealers or part of a spate of recent bank robberies? Who was the mysterious woman at her father’s funeral? Why did the Circle of God cult kidnap Kat and insist on calling her Ursula? Why did the cult leaders insist that Kat hand over a ceremonial dagger? Would Kat’s ex-boyfriend, Doug Stamper, and his father, Marty, be able to help her after she escapes from the cult?

Overall, The Dagger is a very good, suspenseful read. Plenty of fast-paced action engaged me and kept me turning pages. Anders’ writing was terse and spot on. I look forward to more character development of Kat, Doug and Marty as the series progresses.

The Dagger would be a good holiday or birthday gift for the mystery lover in your life.

Finding Happiness through the Written Word 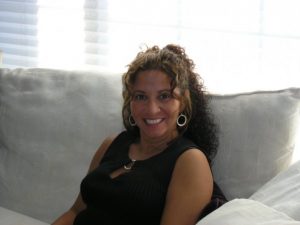 One typical Monday morning I dragged myself to my tedious Human Resources (HR) job. Tired legs, a bored mind and my drooping eyes watched the seconds tick by on the clock. I wondered when this hell would end. When will I be able to escape the suffocating structure of corporate America? That evening, I trudged into my home, laptop in tow, prepared to make a quick, unhealthy dinner and hop on my Dell for another three to four hours of work. I made eye contact with my loving husband, Mike, and he knew.

END_OF_DOCUMENT_TOKEN_TO_BE_REPLACED

Chloe Sunstone, author of a new cyberthriller, the recently released (Oct. 2018) Ginger Snapped, captured the first guest post spot on my blog. Ginger Snapped is the second cybercrime thriller by Ms. Sunstone. She also wrote The Mentor, which was published earlier this year. Look for both of her books at www.amazon.com.

Look for this guest post on Monday afternoon, November 12, 2018.

Over the coming months, keep an eye out for author interviews and guest posts as well as my book reviews.