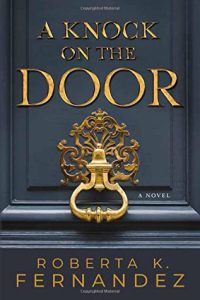 Roberta K. Fernandez’s A Knock on the Door ramps up the mystery and the suspense. Three murders in three months. All employees of SpringWare, a software and gaming development company. What was it about the National Security Agency’s (NSA) software project that was getting so many of SpringWare’s employees killed? Who would be next?

Rita Johnson, personal assistant to SpringWare VP Mark Mason, and previously to Jack Crawford, was one of the first to smell a rat. Especially when she went to download files for a certain project from Crawford’s computer after his death. Jack’s death was labeled an accident, but was it really? Why were some encrypted? Why was Mason being so secretive about this project?

Needless to say, Rita’s curiosity got the best of her, and she made a copy of the files for herself. She uncovered a connected, unrelenting, deadly series of events. Whom could she trust?

Tension and suspense mount slowly and steadily as Rita uncovers what’s happening with help from Lori, widow of Jack, Jacob Browning, another SpringWare employee, Nathan Schilling, a reporter for a local paper, and eventually Matthew Abernathy, a local police officer. These amateur sleuths begin getting closer to the truth about SpringWare’s project for NSA and Mason’s relationship with Carl Baxter, the NSA director. Then even Rita is murdered in what was meant to look like a hit-and-run accident. Who would be next among the seekers-of-truth group?

Fernandez starts the suspense early and continues to ramp it up with this apparent first novel in a series. Her characters are well drawn, and the amateur sleuths become a tight-knit group as the action advances.

I received a free copy of A Knock on the Door via www.ireadbooktours.com in exchange for an honest review.