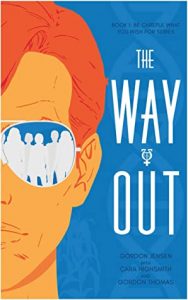 The Way Out by Gordon Jensen, with C. Highsmith and G. Thomas, begins in the near future, 2025. The Alpha Centauri I is the first manned spaceship to be sent to the planet Proxima b, in the Alpha Centauri galaxy, 4.24 light years. All is going well on what would have been a ten-year mission (measured in earth time) until the spaceship encounters increased energy pulling them towards what is assumed to be a black hole. Forty years later, the spaceship appears and plummets into the ocean. After a short prologue on board the spaceship, the rest of the story is told in the form of interviews conducted by a documentarian-journalist who talks with a NASA employee who communicated with the spaceship the day of its return to Earth and major crew members.

Their arrival dispels the idea that the spaceship had been lost after entering what everyone thought was a black hole. The interviews with the crew illuminate the cool, guarded reception the crew received upon being rescued from the sea after plunging to Earth. No hugs and kisses with loved ones. No ticker tape parades. Why?

Apparently, things had changed significantly between 2025 and 2065. Fewer men, more women in power, what else had changed? Global population had fallen to just over 2.5 billion people. Why? Seemingly, when eaten, the genetically modify organism (GMO) corn used as biofuel for the spaceship interacted with the male Y chromosome and rendered it inert. This became another viral pandemic. Consequently, fewer babies were born, and even fewer of them were males.

Think about the world with no sports teams because of insufficient males to compete. Or a world with reduced digital and electronic communications because of a war that broke out fighting over who would control the supply of the new corn prior to the recognition of its drawbacks and repercussions. Think of the decrease in population where most survivors migrate towards metropolitan areas away from the devastation caused in agricultural areas based on trying to destroy the new corn with its ominous side effects.

The near-future Earth world created by Gordon Jensen has many of the same problems as our present-day one. Scarce resources, and fights over those resources, are still all too real. Unconscionable actions deemed necessary by the government “for the greater good” are taken or suggested that affect the human rights of the spaceship crew. Pandemics still rage and vaccines are still viewed as problematic by some of the population. Conspiracy theory alarmists would have a field day with everything carried within the vaccine in Jensen’s created world.

I enjoyed this fictional world and the characters within it. However, as stated previously, the story moves forward by means of interviews with the major characters. This is an interesting concept. On the other hand, vivid action and suspense are rather subdued. Everything is relayed to the reader second-hand and is seen through limited viewpoints. However, we get to meet each important character and learn their foibles up close.

I recommend The Way Out and look forward to reading Two Roads to Paradise, the second book in Gordon Jensen’s Be Careful What You Ask For series.

I received a free copy of this book from ireadbooktours.com in exchange for an honest review.