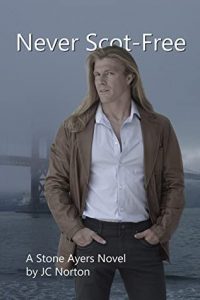 Stone Ayers works for Dominic Balducci, a restauranteur who also owns multiple other types of businesses. Ayers ostensibly is his Information Technology (IT) guy. Yes, Ayers does work of that sort for Balducci, including programs that keep track of Balducci’s under-the-table operations, of which the biggest is drug dealing in cocaine. But IT isn’t Ayers main job or even his strongest skill. Killing is – Ayers is adept at killing without remorse in a number of different ways. Snapping someone’s neck or having a death appear to be an accident. This skill of Ayers’ came to the forefront during his time in the United States Army Special Rangers.

Ayers’ justification for  his killings is that they are necessary and don’t harm others (no collateral damage, in modern parlance). That is, until he becomes seriously in love with Gudrun Weimar, who he met previously while on assignment on a trip to Antarctica. How will Ayers resolve the conflict between what he does for Balducci and his intense love for Gudrun? This conundrum is not resolved by the end of the book. We can only see what develops over the rest of the series.

Suspension of Disbelief? Maybe Not

This series is entertaining, but there are a few things in Never Scot-Free that may shake up the reader’s suspension of disbelief. Things such as everything being too perfect for both Ayers and Balducci. For example, Ayers is a 6’2”, blonde-haired, blue-eyed Adonis. He has a perfectly shaped body that he, naturally, keeps well-toned. He is on very good terms with Balducci and his family. Ayers loves a beautiful, whip-smart scientist and environmentalist, Gudrun Weimar. He sees no problem disposing of people who appear to be hurting his boss, and whom Dominic Balducci wants eliminated. Ayers “saw himself as being just a particular kind of soldier, working for a commander whom he happened to like a whole lot more than the ones who’d given him orders in the US Army.”

A similar glowing light shines on Dominic Balducci. He’s wealthy, with several businesses. He has a loving wife, Brenda, whom he’s loved since they were teenagers. His 17-year-old son, of whom he’s proud, is smart, honest and has a great girlfriend. Nice house, businesses doing well. Even making a profit from the cocaine sales. Ayers looks up to him because Balducci is “tremendously loyal to those who worked closely with him.”

Peter DelBino, Balducci’s brother-in-law, runs one of Balducci’s businesses and deals cocaine for him, too. DelBino syphons off some of the cocaine he receives and profits by selling it for a higher price to another dealer. Balducci instructs Ayers to find out what’s going on and stop it.

A Little Too Rosy

Never Scot-Free focuses on Ayers’ tracking of DelBino and his associates. Ayers’ relationship with Weimar also matures to a certain extent. This addition to the Ayers series gives enjoyment. But its depiction of Ayers and Balducci is a little too rosy. Lots of good qualities and few or no flaws. Also irritating is Ayers’ and Balducci’s attitude to killing – it’s justified. For example, Balducci had a high opinion of himself: “He was not a bad person, he’d once told Stone. He did bad things sometimes…but only because they were necessary to protect his family and what they had, or to avenge a wrong. He would never ‘turn the other cheek.’ These deeds were, as he saw them, justified, and he did good things too, lots of them.” Such a self-centered philosophy is questionable, to say the least.

Despite the rather too rosy portrayal of Ayers and Balducci, Never Scot-Free was a welcome diversion. Good pacing throughout, even with some overlong descriptions of Ayers’ methods for tracking DelBino. Plus, relished the many “naps” in which Ayers and his amour indulged.

I will continue to read about Stone Ayers and look forward to future installments. For my review of Orca, the first in this series, click here.

I received a free copy of Never Scot-Free in exchange for a voluntary, honest review.