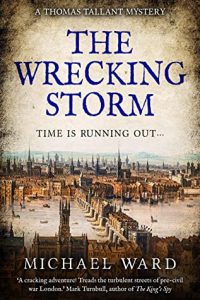 Michael Ward has done it, again, with his second Thomas Tallant adventure. The Wrecking Storm takes us back to mid-17th century England. This was a period of political unrest, disagreements about religious freedom between Puritans and Catholics, and civil war.

The Wrecking Storm continues the focus on the Tallant family begun in The Rags of Time. The Tallants are well-to-do merchants in the spice trade. The family is slowly drawn into the unrest incited in part by the Puritans engulfs the Tallants. A confrontation with an angry mob occurs at their business’s warehouse. And their home on the outskirts of London is attacked and a friend’s son is killed. Tensions throughout London and the country tighten. All events destined to lead to “the wrecking storm…a vicious, painful civil war, with no escape.”

Puritans sought to cleanse the Church of England of any remaining Roman Catholic practices. Later, the group played a significant role in the Protectorate under Oliver Cromwell. Ward does an excellent job of portraying the tensions of this period as the Tallants have both Protestant and Catholic friends. The research he did into this particular time period is evident and informs, but does not overwhelm, the story.

Again, as with The Rags of Time, Ward’s pacing of the novel is quick but steady. His characters are attractive and engagingly differentiated. Especially the relationships Thomas has with his father, Elizabeth Seymour, and Barty.

This book, like The Rags of Time, is a must-read if you like historical fiction with a bit of mystery thrown in.

For my review of The Rags of Time, Ward’s first Thomas Tallent adventure, visit here. 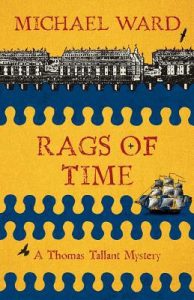 Great mystery along the Thames. Set in mid-17th century England, Rags of Time, by Michael Ward, is a marvelous adventure. Steady, quick pacing and skillful characterization put their arms around your shoulders and pull you headlong into the chaos and confusion surrounding Thomas Tallent. Even the minor characters are interesting and endearing.

Thomas Tallent, a spice merchant, just back from India, is thrust into the midst of uncertainty. In addition to the beginnings of civil unrest fomenting in London, a rich wool merchant has died under mysterious circumstances. Within months, the merchant’s partner is also dead. Likewise a destitute young teenager caught inside Tallent’s warehouse. Whispers among the nouveau riche merchant class point to Tallent as the perpetrator. Why would Tallent kill these men? What would he gain? Who can he trust to help clear his name? Edmund Dalloway, his oldest friend? Or Elizabeth Seymour, his new love interest? Is there anyone he can trust besides his parents? They can only do so much. Tallent sets out to prove his innocence, but that doesn’t stop the gossip mill and one of the not-too-bright officials. What’s to be done? Can help come from Robert Petty, one of the investigators?

This mystery on the Thames is a spectacular read. According to an interview Mr. Ward did with Esther Rabbit (see her blog), there will be at least four more books featuring Thomas Tallent during the English Civil War period. Looking for more from this author.

I received a free copy of Rags of Time in exchange for a truthful review.