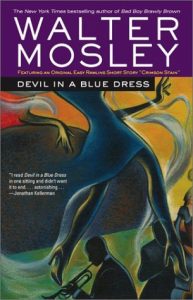 Ezekiel “Easy” Rawlins makes a likeable protagonist. As Devil in a Blue Dress begins, he’s just been fired from a job at a defense plant. In order to pay the mortgage payment on his new little house, Easy works as a private investigator in 1940s Los Angeles for a strange, white gangster.

Rawlins’ search for a white, blonde-haired female last seen wearing a unique blue dress takes the reader all over the late-1940s Los Angeles area. He finds the female but allows her to slip through his fingers. Easy benefits to some degree from money stolen by the woman from the white business owner who’s looking for her. Rawlins later learns the woman’s true identity. This factors significantly into the story told to the police and to the white man paying to have her found. Several folks end up killed, including the gangster who had acted as go-between with Rawlins and the businessman.

Over the course of the story, I came to like Easy Rawlins very much. He’s mostly honest, smart and courageous, although the same can’t be said for some of his so-called friends. By the end of the novel, Rawlins has found himself self-employed. He invested some of the “found” money and some of his investigator’s fee into another house that he rents out. And he takes on cases as a private investigator.

Devil in a Blue Dress (written in 1990) handles race relations as a noticeable subplot. Similarities exist between when the plot takes place – the late 40s – and today. “The thought of paying my mortgage reminded me of my front yard and the shade of my fruit trees in the summer heat. I felt that I was just as good as any white man, but if I didn’t even own my front door then people would look at me like just another poor beggar, with his hand outstretched.”

Reading more of Walter Mosley‘s Easy Rawlins series will be no hardship. Mosley’s prose style draws you into the story and holds your attention. I look forward to seeing what he’s been up to since this series opener. Judging by the number of books (15, including Blood Grove, published in 2021), Easy Rawlins has gotten himself into quite a bit of mystery and tight spots.