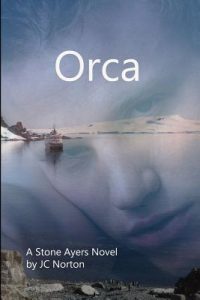 Orca by JC Norton does a slow, stealthy burn. Stone Ayers stalks a man as they cruise to Antarctica aboard Polar Adventurer, a luxury expedition ship. Like the orcas, Ayers, a former Special Forces Ranger, is not faint-hearted when it comes to conflict and death. Ayers plans to kill another passenger, of whom he has been contracted to dispose. Orcas and Ayers, predatory killers, is the theme here.

As time passes in Orca’s milieu, Ayers morphs from a ski-loving, IT guy into a contract killer. He works for Dominic Balducci, who has businesses on both sides of the law. Shades of the mafia? Characterization of Ayers and a few of the secondary characters stands out as well done. The story’s pacing is steady, but somewhat sluggish. Much is said about penguins, with other wildlife in that region, such as the huge elephant seals, given short shrift. In fact, only one mention is made of an orca pod. Considering orcas, and by extension, Ayers, are alpha killers, that’s an indirect connection that hits below the radar.

Although likeable, Ayers’ compartmentalization of what he really does, is off-putting. He considers his body a machine and killing as “just a job.” To others, he says he works as an IT consultant—true enough as far as it goes. He does have a college degree in information technology. What will happen to his budding relationship to Gudrun, one of the naturalists leading the expedition, if and when she finds out? Granted, Ayers becomes personally involved with a few of the crew members. He even starts considering their passions and feelings. Hopefully, this change continues as the Ayers series progresses.

For me, the ending was anticlimactic. The plot plods a bit too slowly to be suspenseful. For fear of spoilers, I’ll leave it at that.