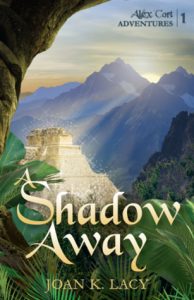 Searching for El Dorado in the Amazon jungle, Alex Cort and Andrew Seaton need all the help they can get in A Shadow Away by Joan K. Lacey. Cort, a private art theft investigator, and Seaton, a British archaeologist, search for the fabled city of gold based on an old map, a gem and a golden idol that’s gone missing. As Cort and Seaton slog through the jungle assisted by a local guide, they’re aided by Angel, a mysterious being from an alternate universe. Angel’s heightened senses and skills, some would say magic, keep the searchers a step ahead of Benjamin Guelf, an unscrupulous rival collector.

Although Angel uses her powers to get the group out of danger on occasion, she seems withdrawn and not really part of the group. The reader learns nothing about her antecedents or world. On more than one occasion, Angel implies that Cort and Seaton can attain some or most of her powers. When Cort asks her, she just proclaims that he’s not ready to know such things. Often, as Cort and the others traverse the jungle, Angel seems to walk along in another world, like a slippery wraith.

A Shadow Away might be compared to the Indiana Jones universe. Lacy’s novel involves an archaeologist seeking a religious relic in an intimidating environment while evading unscrupulous competitors. In addition, similarities exist between Lacy’s Alex Cort series and Elizabeth Peters’ Amelia Peabody series. Again, both involve archaeologists searching for artifacts and dealing with danger. But Lacy introduces a subtle dose of magic realism in the search for El Dorado, thus expanding the trope.

Overall, A Shadow Away is an engaging read that kept me interested. I would have preferred to learn a good deal more about Angel even if the information was kept away from Seaton and Cort. She refers to herself as a “witch” and is evasive when Cort asks about her world. She says he’s not ready to know even after Cort begins accepting her abilities, which seems condescending. At times, she seems insubstantial, like a hologram, even when she and Cort become attracted to each other.

Cort and Seaton with their group of indigenous guides hack and slog their way through the jungle undergrowth. Yet, on a few occasions, Guelf and Raul Facón, his nasty sidekick, just step out from behind a tree to confront them looking unscathed and fresh as if Guelf and Facón could just teleport into the area. At one point, the Amazon River, which is full of life-threatening creatures, sweeps Guelf away. Yet, in the final stages of the story, he appears well and hearty.

Still, I recommend A Shadow Away for those who like stories full of adventure, mystery and magical realism. I give this first Alex Cort novel 3.75 out of 5 stars; a solid read. I look forward to the next installment in the series.