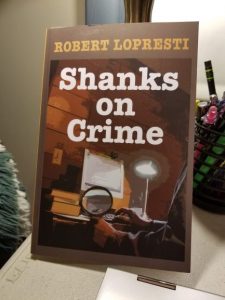 Shanks on Crime by Robert Lopresti is a collection of short stories about Leopold Longshanks and his wife Cora. Longshanks is a mystery writer and an unlikely detective. who, with his wife, Cora, in the background gets into some unusual situations. Shanks, Longshanks’ nickname, then unravels the crime or misdemeanor, all the while protesting that he’s a writer, not a detective. The stories are interesting enough, such as when Shanks sets out to catch the person who mugged him and pays for the miscreant to go to vocational college rather than be convicted and sent to jail. But all the stories follow the same general pattern and pacing, which makes the collection seem rather dull. Overall, a nice set of stories, just not fast-paced.

Several of these stories first appeared in Alfred Hitchcock Mystery Magazine between 2003 and 2014.