As you may be aware, I enjoy reading short-story-length mysteries. Thus, I subscribe to a number of magazines that feature short stories. (See my previous post, here.) Ellery Queen Mystery Magazine, Alfred Hitchcock Mystery Magazine,  Mystery Scene and Strand don’t seem to quell the hunger pangs for ever more stories. So, I search for anthologies and linked short stories in novel length format. Thus, I espied The Tuesday Club Murders by Agatha Christie and Golden Age Detective Stories, edited by Otto Penzler.

The Christie book includes a series of linked stories, all involving Miss Marple. Each member of the Tuesday Club takes a turn describing mysterious circumstances or a problem of which they have knowledge without disclosing the outcome. The rest of the group attempts to discern the ending to the problem. Naturally, Miss Marple is miles ahead of the pack. One or two of the stories dragged, but most were pleasant and interesting. 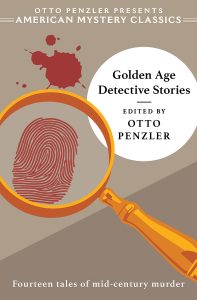 For some time, I had wanted to read some of the Golden Age of Mystery writers other than Agatha Christie. Well, I got that chance with Golden Age Detective Stories. Charlotte Armstrong, Anthony Boucher, Mignon Eberhard and Erle Stanley Gardner are among the stellar authors presented. I had seen the dramatization of Gardner’s story (“The Case of the Crimson Kiss”) as part of the 1960s Perry Mason series starring Raymond Burr. Truth be told, I enjoyed the TV dramatization more than the original story.

The Ellery Queen offering was a pleasure. Craig Rice (“Good-bye, Good-bye!”) is a new addition to my growing list of favorite authors. As are Frances and Richard Lockridge, creators of the Mr. and Mrs. North mystery series, as well as three or four other series. The Lockridges now sit atop a towering pinnacle of authors whose entire oeuvre I want to read.