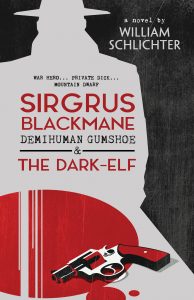 Looking for a well-written mystery mixed with some fantasy? Then Sirgrus Blackmane Demihuman Gumshoe & The Dark-Elf by William Schlichter is a must read. Sirgrus Blackmane, dwarf, war veteran, and detective, seeks the murderer of Craig Mason. Although Mason is human, Blackmane and Mason fought the orcs together in the world war and subsequently open a detective agency as partners. After Mason’s death, Blackmane investigates a case concerning Doris, a dancer whose death may have been suicide, or murder. Was this death linked to Mason’s death?

Blackmane has a slightly twisted sense of humor. When interacting with a rock giant at The Dark-Elf (a bar), Blackmane thinks, “They’re immune to magic-edge weapons, and I left my howitzer in my other coat.” Blackmane is also an unreliable narrator. He says, “I don’t speak about the war.” But illusions to the Great War are forever creeping into his narration of the story. In fact, it inhabits a lot of the story. Blackmane also declares he hates magic. But magic, in the form of FBI Agent Edgeangel, a mage, helps him solve his cases.

Schlichter does well at mixing the real world with his created fantasy world. America is a land of humans and demihumans and other creatures. Dwarves, mages, fauns, trolls and other creatures inhabit this world with humans. Although no specific time frame is mentioned, there’s been a world war and Prohibition is still in full effect. Segregation rules, with races confined to different sections of the city where Blackmane resides. Interactions between the demihuman, magical creatures and humans are natural and convincing. Even down to stereotypical attitudes so similar to the ones in our current culture. Schlichter’s solid prose and good characterization kept the plot moving and my interest level high. I look forward to reading more about Sirgrus Blackmane, demihuman gumshoe, in the future.

I received a free copy of Sirgrus Blackmane Demihuman Gumshoe & The Dark-Elf from www.readersfavorite.com in exchange for an honest review.