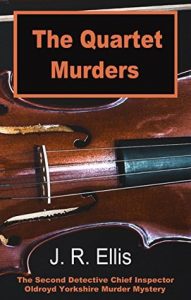 Detective Chief Inspector Jim Oldroyd is thoroughly enjoying a concert of chamber music in a chapel in a small Yorkshire town when one on the quartet members is shot while performing onstage by an unseen assailant and the musician’s irreplaceable Stradivarius violin goes missing. No one is seen leaving the building, yet the murderer and thief aren’t found. Is this the work of a gang of art thieves with whom some of the locals are involved? A few of the local well-heeled gentry are known for their private collections of rare and priceless musical instruments. Before long another member of the quartet is killed, and his murder linked to the stolen violin. DCI Oldroyd assists his old friend, DCI Sam Armitage of the local Halifax police force, in unraveling the knotted strings of these mysteries. The police assume the two deaths and the theft of the violin are committed by the same group of criminals. But are they connected or are they separate cases?

The main characters, Armitage, Oldroyd and Oldroyd’s associate, Detective Sergeant Andy Carter, are well-defined. Armitage “was a jovial character famously renown for his unhealthy lifestyle. A heavy smoker, he was fond of lunching on pork pies laced with brown sauce and his consumption of beer outstripped Oldroyd’s.” Oldroyd is a dedicated police officer as well as a classical music lover who’s longing to reunite with his ex-wife. DS Carter, who gets on well with Oldroy, his superior, is falling in love with Yorkshire as well as one of his co-workers, DS Stephanie Johnson.

The setting is well conceived. The town, down on its heels after the closure of its textile mills, is still lively with weekly market days and Christmas decorations. The red-brick chapel where the concerts are held is an eccentric venue for classical music concerts, according to Oldroyd.

Although the characters are likable, sometimes their personal lives get in the way of the story. Oldroyd’s contact with his sister furthers the plot as they discuss the deaths and theft, but his interaction with his ex-wife and daughter does nothing except slow the plot and drop readers out of the mystery. His daughter is usually off doing her own thing, except for cadging money from Dad. His wife is a downward drag on the story because of her somewhat defeatist attitude.

The plot moves along at a slow but steady pace; one wonders why a few more modern techniques of police investigation were not used, such as checking fingerprints at the two crime scenes. Sometimes, it seemed as if Oldroyd and Armitage were just scratching their heads and ignoring subtle clues from Alison, Oldroyd’s sister, and Miss Dobson. “Have you got anything, Jim? We’re banging our heads against a brick wall with this one,” Armitage says at one point.

The Quartet Murders is the second book in a series about DCI Oldroyd. Based on the plot of this book, I might or might not read the others. The main characters were likable and believable enough to create some interest in the other books in the series. This plot, however, could have use more punch. Overall, a rating of 3.5 stars for The Quartet Murders.

I received an eBook ARC and was asked to give my honest opinion.

49 thoughts on “Review of The Quartet Murders”