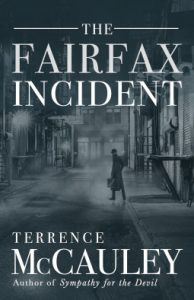 The Fairfax Incident by Terrence McCauley

Charlie Doherty, private investigator, “crooked” ex-NYPD detective, ex-Marine, thinks he has it easy. Since his “retirement” from the police force, he has been investigating cases for wealthy clients and being paid handsomely. Cases are funneled to him by the mysterious Harriman Van Dorn—easy cases such as tracking down wayward offspring or tailing spouses in divorce cases. Easy, that is, until he takes on the case of a society matron wanting to know why her husband was murdered. Although the police had ruled Walter Fairfax’s death an open-and-shut case of suicide, his wife thinks otherwise, “Walter was incapable of suicide. Not that he wasn’t a coward, mind you, for Walter Fairfax was most certainly a cowardly man. He simply wasn’t considerate enough to kill himself.” He was too busy making sure his insurance company remained a successful venture even throughout the Depression, during which time this story takes place. Mrs. Fairfax is adamant that someone drove her husband to his death, “The lives and fortunes of insurance men are based on calculations and charts and payment schedules that were created on the off chance that something terrible might happen to a policy holder one day. Do you know that they even have charts that can determine how long a policy holder will live based on certain factors? What’s even more troubling is how accurate the charts are…And that is why, Mr. Doherty, I know my husband did not take his own life.”

So, heaving an inward sigh, Charlie takes the case, thinking it will be a no-brainer to just read the police reports again, talk to a few of Mr. Fairfax’s associates, do some research on Walter Fairfax at the library, wrap up the case quickly and collect another handsome fee. So much for a quick resolution when he gets shot at while walking from the posh apartment of Mrs. Fairfax downtown to the New York Public Library.

The story escalates with the death of someone close to Mr. and Mrs. Fairfax who had information that is helpful to Doherty’s case, Doherty’s catching a beautiful female spy and his realizing that his former cohorts at the police department want to throw a billy club into his investigation.

Although this story is well-paced overall, it gets off to a very slow start, “I stifled a yawn as I listened to the old lady repeat herself for the third time. Or maybe it was the fourth. I’d lost count by then.” I almost did, too—yawn and lose count.

Slang phrases from the 1930s— “the old lady,” “Hooverville,” “Kraut” and calling various places around town a “dump”—are scattered through the first half of the novel to add verisimilitude, but really don’t add much to the story.

Some of the characterization is stereotypical, such as Charlie Doherty and Andrew Carmichael being crooked Irish New York City policemen on the take as part of the Tammany Hall political machine. Mary Pat Dennehy, the library assistant who locates information for Doherty is a “shy, heavy girl with bad skin and thick glasses” who writes fan mail to Doherty during one of his previous cases. “Girls like Mary Pat were a dime a dozen in this town,” but Doherty feels sorry for her because she’s “a sweet kid.”

Yet other characters are more interesting, such as Father Mullins and Harriman Van Dorn. Mysterious Father Mullins knows about guns, foreign languages, mystic runes, and Nazis. Although Van Dorn is very elusive during the first part of the novel (shades of Mission Impossible— “your mission, should you choose to accept it…”), later he is depicted as a loving family man and unofficial government operative.

But, I do like Charlie Doherty’s first-person narration of this case with his smart-mouth responses to his former NYPD colleagues.

All told, this is a nice, fast-paced look into pre-World War II intrigue.

Thank you to Polis Books, LLC and www.netgalley.com for sending me an e-book galley copy of this work. I was asked to give my honest opinion of the book.