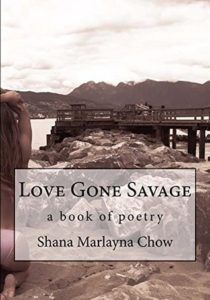 The poems in Love Gone Savage by Shana Marlayna Chow grip you in a vice. From the instant you begin reading they pull you into a world of love, trust, distrust and brokenness on the one hand and optimism and perseverance on the other. These poems are not about cooing and infatuation, but about love somehow gone awry.

Her poetry stands on its own but is as clear and intense in vision as the love poems of Pablo Neruda, Ted Kooser (see especially his book, Valentines © 2008) and various poems of Rumi. Although Chow’s vision may sometimes seem harsh, it reverberates today when love may never feel like a sure thing—the search for a soulmate by a passionate, independent woman. But a sense of purpose and confidence shines through the poems that on the surface seem only to reflect a sense of emptiness and the pessimism of another broken affair.

…And amongst everything
and letting wounds heal,
it’s okay to forgive,
but never go running back
to whatever broke you…
[page 70]

In the second half of the book, pessimism give way to confidence: You will never be everyone’s cup of tea…/Don’t waste your energy trying to/conform to what you thing this world wants./…Be you,/the good will follow.

This book is a keeper for me. It will sit among others on my shelf such as those by Billy Collins and the late Mary Oliver.

I was given a copy of Love Gone Savage by the author for an honest review. I do not know Ms. Chow personally or professionally.