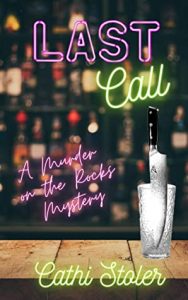 Who can you trust, if not your friends, drinking buddies, and regular customers? That’s the question stumping Jude Dillane and Thomas “Sully” Sullivan, her landlord and friend. The dumpster behind The Corner Lounge, Jude’s bar/restaurant hides a body. Turns out, it’s the recently arrived brother of one of Jude’s regular customers, Art Bevins. Who would want him dead, and why? Who among the “10th Street Irregulars,” Sully among them, would have the guts to do such a thing? Last Call by Cathi Stoler keeps the reader guessing.

When Elaine Garlinger, an FBI agent, takes charge of the case, she starts talking about a serial killer. Because of the murder weapon and the physical appearance of the victim, Garlinger connects the current crime to the New Year’s Eve Killer.  And things really heat up for Jude. The killer begins leaving her threatening notes, both at The Corner Lounge and slid under her apartment door. How does he know where she lives? And how does he get into the building, anyway? Why is he so interested in Jude? Does the killer think she’s seen him or knows his identity in some way?

Believable, likeable characters entice the reader in Last Call by Cathi Stoler. The reader meets characters first seen in Bar None, such as Dean Mason, Jude’s hunky bartender; Sully Sullivan; Tony Napoli (who is this guy anyway?!); and Pete, Jude’s chef and co-owner of The Corner Lounge. Eric, Jude’s new boyfriend, earns a larger part in this second book of Stoler’s Murder on the Rocks series.

I’ve read three of the four books in the Murder on the Rocks series. All of them held my interest based on characterization and, to a lesser extent, plot. I want to read further in this series and look forward to the next installments. See my reviews of Bar None and Straight Up.

I received a free copy of this book from booksirens.com in exchange for an honest review.