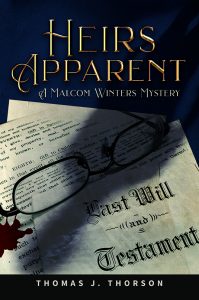 Malcom Winters, alias for the initially unnamed narrator of Heirs Apparent, by Thomas J. Thorson, escorts the reader on a journey. Wandering through Greyhound terminals, always on his way to the next place, Winters introduces us to a variety of characters, human and architectural. Freddie Four-Fingers, the African American forger, from Winters’ old life. Felicity “Fyre” Stockton, Winters’ new lover, as tight-lipped about her past and present as Winters is about himself.

The list of bizarre characters grows longer once Winters settles down in a three-flat he buys in Chicago. Leo, a tenant, and ersatz chef, supposedly made an assassination attempt on Castro. Ted, or Rebecca, a cross-dressing businessman, Winters’ other tenant. V. N. “Vinn” captures the prize for normalcy in Winters’ expanding network. She’s a science professor at the local university where Winters takes a creative writing professorship for which he’s not credentialed. But even Vinn keeps secrets about her past.

Are Fyre’s secrets the reason for an assailant to fire at her and Winters when they exit a restaurant? Why does Fyre evade Winters, who follows her to the Old Post Office? Who kills Fyre and wounds Winters while there? Help tracking Fyre’s killer comes from Winters’ network of odd-fellow friends.

Leo, Ted/Rebecca and eventually Fyre are fleshed out in Heirs Apparent. Even the Old Post Office comes alive under Thorson’s light and able touch. Each character is deftly drawn and given their own, credible, story. Vinn and Winters remain something of an enigma—hopefully to be further developed in the next installment in the Malcom Winters mystery series.

1 thought on “Heirs Apparent – A journey of love and death”