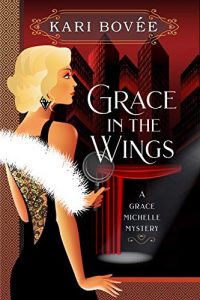 Florenz “Flo” Ziegfeld, Jr., Fanny Brice, Mary Pickford, Hedda Hopper. These are a few of the famous Broadway and Hollywood names from the early 20th century mentioned in Kari Bovée’s Grace in the Wings. But this name dropping gets the story off to a very sluggish start.

Grace Michelle, the smart, beautiful, younger sister of Sophia, one of Ziegfeld’s stars in the eponymous Follies, works as an assistant costumier there. After Sophia’s death, Grace is thrown into a number of unusual circumstances, including trying to determine if, and how, Sophia was murdered.

Flo Ziegfield masterminds making Grace the star of his Follies to replace Sophia. He also masterminds sending her on a whistle-stop, cross-country train trip to drum up business for his show. The publicist, Donovan Green, sent along to assist, nearly gets Grace killed during this trip. “How did I get into this mess? All I want to do is design and sew costumes.”  Thus muses Grace to Chet Riker, her bodyguard and new love interest. Did Sophia commit suicide or was it murder? And why would Chet mislead Grace when she asked questions about her sister’s death and the police report?

Change in the Wings

Also, Grace is innocent and naïve at the beginning of Grace in the Wings. For someone orphaned and homeless at a young age, and who then led a life in the theater, she’s too innocent and naïve. Did Grace never wonder what Sophia did to keep them alive while they lived on the street and after Flo Ziegfeld took them under his wing. However, Grace does change and mature as the novel progresses.

I was gradually drawn into Grace in the Wings, even though the plot was sluggish in spots. But tension and suspense did ramp up. Bovée provides great characterization of Grace, Flo Ziegfeld, Fanny Brice and some of the minor characters. Grace, especially, comes into her own.

I look forward to reading other installments of the Grace Michelle Mystery Series.
I received a free e-book copy of Grace in the Wings from ireadbooktours.com in exchange for an honest review.

Enter to win a $35 PayPal gift card, autographed copy of GRACE AMONG THIEVES, and gift basket containing mouse pad, mug, and tote bag courtesy of the author of the Grace Michelle Mysteries! (one winner/USA only) (ends April 4)

1 thought on “Grace in the Wings”