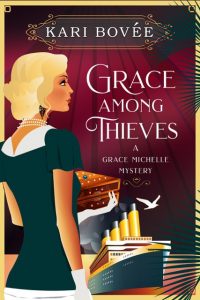 In Kari Bovée’s Grace Among the Thieves, Grace finally gets to meet her father. Why had her father waited so long to contact her? She thought he was dead. Many years dead. When had he remarried? When had he become a heroin addict, and why?

Who would beat Anna Ivanova almost to death for a mysterious package? Valentina Baklanova, Ivanova’s niece, draws Grace into the investigation. Baklanova works at the same Hollywood studio as Grace.

The pressure on Grace and her friends ramps up when Madeleine, her father’s second wife, is kidnapped, and a note left about the same mysterious package.

Grace and Chet, her husband, are faced with keeping their circle of family and friends safe as murders and break-ins abound. Will they be successful and find the package? And learn what it contains? Will they succeed and beat the clock?

Why does Grace remain fixated on her sister four years after her death? Including still wearing Sophia’s dressing gown in the evenings and mornings. Grace now has a loving husband, a promising job as a clothes designer and as a costume designer for Ambassador Studio. As well, she and her husband care for a few teenage orphans.

In this third entry in the Grace Michelle Mystery series, Kari Bovée succeeds in growing Grace in confidence and likeability. The plot moves along at a fair pace. However, the supernatural aspect, in the form of Grace’s dreams and voices initiated by Sophia, her deceased sister, leaves a lot to be desired. Those aspects slow the plot and are not really believable. Sophia’s ghost does a lot of the heavy lifting in the hunt for the package and the crime’s solution. She provides connections and hints that could have been better provided through other, natural, means.

I have read the first and third installments in Grace Michelle Mystery series. I’m not sure I will read other books in this particular series. Although I like the characters more in this book than in Grace in the Wings, the plot in Grace Among Thieves had aspects that were less than credible.

See my review of Grace in the Wings, here.

I received a free copy of Grace Among Thieves from ireadbooktours.com in exchange for an honest review.

6 thoughts on “Grace Among Thieves”