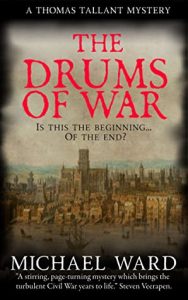 The tension that was building between the Parliament (led by the Puritans) and King Charles 1st in Michael Ward’s Thomas Tallant series boils over in his newest addition, The Drums of War. (See my reviews on his first two Tallant novels, The Rags of Time and The Wrecking Storm). Chaos in London’s streets and elsewhere is a main weapon of Parliament’s supporters, at least so far. Often brutal chaos erupts – breaking and entering, jewel theft, riots in the street. Then the hell of war breaks loose.

While Sir Ralph Tallant refuses to take sides, Tom and Elizabeth both help, each in their own way. Tom joins the Trained Bands. Elizabeth does research and detective work to help friends and acquaintances track thieves and burglars; then helps tend the wounded as skirmishes begin.

Ward’s characterization is perfect. Thomas Tallant is smart and patriotic. His dislike of war doesn’t prevent him from taking sides, albeit reluctantly. Meanwhile, his father insists on riding the fence. His excuse is that he’s on the side with whomever seems to allow his business to continue.

Smart and courageous describe Elizabeth Seymour. Her interests include astronomy, science, medicine and detection. Elizabeth is a good foil for Tom. She’s mentally strong, helping William Harvey tend the wounded at a primitive MASH site close to skirmishes between the king’s supporters and Parliament’s supporters. When the supplies she brought ran out, she just “soldiered on.” As she thought about the wounded she’d already tended to, “she laughed bitterly at the memory of those who said the war would be over after one encounter. She always thought it a forlorn hope…she knew it for what it really was – a bloody fool’s dream.”

Even secondary characters, such as Jake Dibden, a sailor who works on the river, are well executed. Visualization of Dibden, with his strong arms and shoulders, rowing Tom downriver to search for caches of gunpowder stored for the king’s army, comes easily with Ward’s erudite description.

Ward’s descriptions of the chaos amid fog off the Thames during skirmishes of the civil war are exceptional. The Drums of War is excellent reading. Lovers of historical fiction and mysteries will be speedily drawn in.

1 thought on “Drums of War”