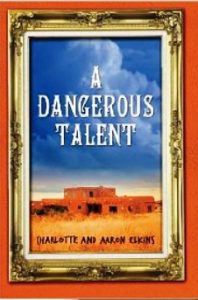 A low-slung Lamborghini cruises along a curvy, narrow road through scenic New Mexico mountains. Will Alix London and Christine LeMay survive when a tailgating pickup truck and a tractor trailer barreling down the wrong side of the road try to force them through the guardrail and down a cliff? Charlotte and Aaron Elkins wrote A Dangerous Talent as the first installment of the Alix London series. Previously, Charlotte wrote five romance novels pseudonymously as Emily Spenser. Aaron’s 16-novel mystery series featuring Gideon Oliver and three-novel series about Chris Norgren are familiar to mystery lovers.

Alix London attempts to grow her art consultancy while distancing herself from the long shadow of her father’s high-profile art forgery conviction. Validating a “recently discovered” Georgia O’Keefe painting for LeMay could jump-start London’s career. Quickly, London pegs the art work as a forgery. So why would someone try to steal it and kill the gallery owner who was selling the painting? And, why would someone want to kill London and her client? Would it have anything to do with the forgery?

London and LeMay are well-drawn and likeable characters in this series-starter. Ted Ellesworth, an FBI agent, and Geoff London, Alix’s father, provide the nascent love interest and a bit of angst, respectively. Also, Elizabeth Coane, the Blue Coyote gallery owner, is the decidedly-tipsy linchpin around whom a lot of speculation revolves.

For me, the dramatic car chase mentioned above is the most thrilling moment in the novel. After that, the resolution of the mystery seems anticlimactic. One minor thing is a small time discontinuity that wasn’t caught by the editors. The story moved along at a good pace and kept me guessing. But, I found the mastermind behind the mystery to be a let-down. Overall, I enjoyed this read and will move on to A Cruise to Die For, the next installment in the series.