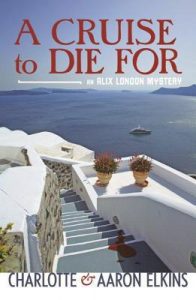 A Cruise to Die For
by Charlotte and Aaron Elkins
Publisher: Thomas & Mercer
© 2013
Paperback

Cruise the Mediterranean, looking out at the warm blue waters of the Aegean and Ionian Seas. Visit the Palace of Knossos on Crete with no other tourists around. Stroll on the Promenade in Corfu. Eat well on a mega yacht owned by a Greek mogul. All in the name of catching a cagey art collector who is not always on the up-and-up when selling paintings from his collection.

Along for the ride on this floating dreamboat, Alix London is the eyes and ears of the FBI until she gets help from Ted Ellesworth, her FBI contact, who comes aboard as an investor later in the cruise. The second installment of the Alix London series, A Cruise to Die For finds London knocked unconscious on the floor of the yacht’s music room and, later, in the middle of a standoff between the police and art thieves in Albania.

The FBI suspects Panos Papadakis, the “squat, neckless, and incontestably toadlike” multimillionaire and art collector of running a Ponzi scheme. He buys paintings “based purely on his estimate of their likely increase in value,” and then sells fractional shares in these paintings to eager investors. Papadakis sells the paintings to a hand-picked group of art collectors for more than he paid for them at a private auction while they cruise on his yacht. The investors make money, supposedly.

But, does Papadakis really pay up? Are the paintings the real deal? London thinks one of them is a fake. After she candidly gives an off-the-cuff opinion about the painting, someone knocks London unconscious and slashes the painting. Who would slash a fake painting? Who placed the fake in the auction in the first place? As they cruise the Greek isles, Ellesworth and London compare notes, but appear stumped about whether the private auction is bona fide and if Papadakis deals in fractional shares of the paintings.

After leading the reader on a merry chase, the ending appears rushed and somewhat unsatisfying. One such example is an argument between Papadakis and his wife, Gaby, near the climax: she hits him with a silver hairbrush, drawing a little blood. She departs the yacht thinking she might have killed him. Really? That would need to be a strong blow with such a weapon, especially from out-of-shape Gaby. Another example: Although the Albanian mob is involved, their contacts on the yacht are not whom one would think. Even Agent Ellesworth admits he did not suspect the actual perpetrators.

All in all, a nice blend of art history and travel in the eastern Mediterranean aboard a mega yacht. Panos Papadakis is always suspected of underhanded dealings, so part of the mystery is out in the open from the beginning. But, the denouement leaves something to be desired.

3 thoughts on “Cruise the Mediterranean”