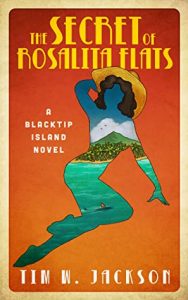 A junk-filled, foot-ball-shaped house was all that Calvin Batten inherited. Or so he thought. Then why did every islander he met talk about hidden treasure, high finance, and golden elixirs when speaking about his father, Rhodes Batten? Cal Batten was on Blacktip Island to finalize his late father’s estate. But, Cal finds, things rarely go so smoothly or quickly on Blacktip. What’s going on in The Secret of Rosalita Flats, a Caribbean mystery by Tim W. Jackson?

Blacktip Island is an out-of-the-way, down-on-its-luck Caribbean misfit. It’s small community, from hardscrabble to nouveau riche, is filled with daydreamers and slouchers. A few, it appears, are looking to strike it rich by finding Rhodes Batten’s hidden treasure.

Strange Characters and Stranger Goings On

Who was Rhodes Batten, besides a loner who seemed to have no visible source of income, yet could afford to support a wife and son? Why had Rhodes Batten’s wife suddenly pulled up stakes and moved to the U.S. with her young son, Cal?

Who is Rosie Bottoms and why does she insist on continuing to clean the house after Rhodes’ death? Why are Rich Skerritt and Sandy Bottoms so eager to buy the weird-shaped house and rather useless patch of land? Tensions mount as Cal’s new home is broken into several times during his short stay on the island. Again, why? Cal’s search within the house leads to several rather befuddling clues. Why have significant amounts of money, a computer, flash drives and a satellite phone been stashed in unique hiding places?

When Rosie Bottoms eventually tracks down Rhodes’ will and other important papers, Cal hopes he’ll finally be able to move quickly to close his father’s estate. And resume his so-called-normal life in the U.S. But to what does he have to go back? His divorce is finalized while he’s on Blacktip Island. His small clock shop is virtually moribund. He’s growing accustomed to the oddball house and becoming interested in Marina, a friend from his childhood on Blacktip.

Tim Jackson does a fairly good job illustrating a variety of eccentric and not-on-the-up-and-up characters in this addition to his Blacktip Island series. Pacing gets slightly sluggish in parts, but still pulls the reader towards the culmination of the mystery.

I found The Secret of Rosalita Flats an entertaining Caribbean mystery, overall. I look forward to reading other offerings in the Blacktip Island series.